Join Our Newsletter
Shop Our Store
MAIN MENUMAIN MENU
By Craig Martin on May 10, 2017 in Guns Save Lives 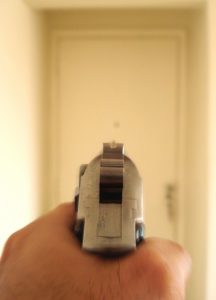 A Houston man has become the hero of his neighborhood after he came to the rescue when his relatives next door were tied up and assaulted during a home invasion.

Houston Police Department officers responded at around 4 a.m., Tuesday, to a call of a burglary in progress at a home in the 3700 block of Crandon Street.

“They had my little sister at gunpoint, so we couldn’t do anything,” said 19-year old Rene Garcia.

He and his twin brother tried to lock themselves in their bedroom when they heard their mom and dad screaming and struggling.  At least one gunman threatened to shoot a family member if Rene and his brother didn’t open their bedroom door, Garcia said.

Investigators said four male suspects tied up the family inside the home using their shoelaces.  Rene Garcia and his father were pistol-whipped to the point they were rushed to the hospital and given stitches to the backs of their heads.

“They took all our jewelry and all the cash our dad has,” said Garcia.

Garcia’s uncle heard the commotion. He grabbed a gun and confronted the suspect who was beating one family member in the backyard. The uncle shot and wounded that suspect.

When the other three tried to jump a fence, one of them turned toward the uncle with a pistol so he shot him, police said. That suspect died at the scene while the other two suspects got away.

“They were all wearing ski masks,” said Houston Police Department Homicide Detective, David Stark.  At the time of this writing, Houston police haven’t been able to track down a solid description of two suspects, nor do police know if the men got away on foot or in a vehicle.

What would you do in a situation like this? Would you go to investigate a strange disturbance at a neighbor’s? At your family’s? Let us know below.