Join Our Newsletter
Shop Our Store
MAIN MENUMAIN MENU
By Craig Martin on May 3, 2017 in News 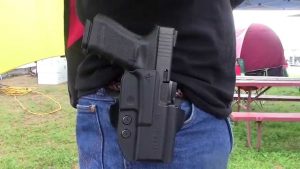 The Texas State House has tentatively approved a measure that will reduce the fee for a license to carry in the state by $100.

The House approved the Senate version of the bill brought to the floor by Senator Robert Nichols of Jacksonville, which would lower the cost of a license to carry from $140 to $40, in a 111-30 vote. The bill would also cut the cost of renewal licenses from $70 to $40.

But the measure wasn’t passed without some pushback from Democrats. Several Democrats including Reps. Harold Dutton, Gene Wu, Joe Moody and Nicole Collier pressed King about details of the legislation and questioned why it was necessary for the state.

“I’m just a little concerned that we’ve taken money from these necessary programs and agencies and now we’re giving a break to people who want a concealed handgun license,” Collier said on the House floor Tuesday.

The bill would become law in September if it’s approved by both chambers and then signed by Gov. Greg Abbott. It’s expected to cost the state $21 million, according to the bill’s fiscal note.