Join Our Newsletter
Shop Our Store
MAIN MENUMAIN MENU
By Jacob Paulsen on September 26, 2016 in News 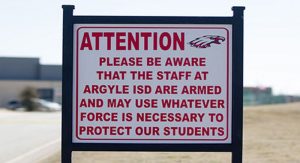 The Medina Independent School District in Bandera County is home to 303 students, and according to a sign placed by an entrance Wednesday, a few firearm-toting faculty members.

“Attention,” reads the sign placed in front of the school. “Please be aware that the staff at Medina ISD may be armed and will use whatever force is necessary to protect our students.”

The school hosts students from kindergarten through high school. Superintendent Penny White said the board of trustees had decided to put up the sign after about a year of discussion.

“You never know if there’s a transient or someone who has zeroed in on harming a child,” White said.

Two other signs will be added to the other entrances of the school, so no matter what way a visitor enters, they will have been warned.

White and board member Dr. James Lindstrom said there was no specific event that prompted the discussion. Lindstrom said it was “the general environment nationally.”

White, whose son attends the school, hopes the sign will deter not just school shootings, but any sort of violence. She used the example of parents in a custody battle who might try to pick up a child and disappear with them or someone in the middle of a divorce who might think they could start a fight at the school.

“I think that anybody who might have a thought about harming someone in mind might think twice about it,” White said.

White also pointed out the remote location of the district.

“We’re 20 minutes or 25 minutes from Bandera,” she said, “That’s our closest law enforcement.”

And while the school itself looked to protect itself, the residents around the school shared something not often seen today with regards to schools and firearms. Support.

“Schools have been a target for, for lack of a better word, crazy people, and I’m perfectly fine with it,” said Jillian Sides, whose two sons are in seventh grade and kindergarten at the school.

The signs only say staff may be armed. If any actually are, White isn’t telling.

“We don’t divulge anything about our safety plan because it would compromise the plan,” she said.

But for those who are thinking about starting any sort of ruckus, it appears that this school should be well off their radar.