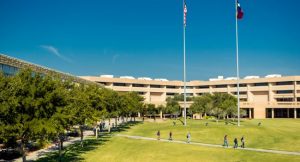 On August 24th The University of Texas of the Permian Basin (UTPB) in Odessa will return to classes, and for the first time, students and faculty will be allowed, to carry a gun into campus buildings. The new law, SB 11, passed through the state legislation last summer and went into effect on August 1st.

The law states that those who wish to carry a gun, must do so with the firearm concealed and must be a legal resident of Texas or otherwise eligible for a nonresident license. They must also be at least 21 years of age and never been convicted or charged with any type of criminal activity.

There are some exclusion zones, on the campus, where even concealed carry will not be permitted. Such as the child care facility and sporting events. If you were to plan to make a trip, we have provided a full list of zones not permitted to carry right here.

However, concealed firearms will be allowed in the classroom. Not just in Odessa, but in campuses around the state. Which is prompting a group of unsettled professors from the University of Texas in Austin to file a lawsuit against Ken Paxton, the Attorney General of Texas.

In their arguments, the professors’ claim that the law violates the first and second amendments.

Their first amendment argument states that with concealed carry on the campus, they will lose their ability to freely teach in the classroom. “It is inevitable that they (professors) will have to pull back, consciously or sub-consciously, at important junctures in classroom exposition and discussion,” the lawsuit states.

Ellen Spiro, professor of Radio, Television, and Film at the University of Texas at Austin and co-founder of Gun Free UT, said, “the idea of a loaded lethal weapon in a classroom instills fear, and it is meant to instill fear in a place that is about freedom of thought.”

In response, Attorney General Paxton called the idea ridiculous. He wrote in a brief that professors saw students as “ticking time-bombs who are likely to commit acts of violence if they are allowed to carry a handgun in class where they are exposed to [their] ideas.”

As for the second amendment, the professors’ argument is that concealed weapons have to be obtained with proper training, but the law in place does not offer enough of it. If professors have to allow guns in their classrooms, then there is enough “reason for the policy and that their regulation of the concealed carrying of handguns on college campuses is ‘well-regulated.’ Current facts indicate that they cannot do so,” says the lawsuit.

So Paxton and the many in the Texas government say that the next step is to simply throw out the lawsuit, but from the strong tone being used on the anti-gun side, it is pretty safe to say that this fight might last for quite a while. For the time being though, campus carry is the reality in Odessa and around the State of Texas.