Join Our Newsletter
Shop Our Store
MAIN MENUMAIN MENU
By Craig Martin on June 5, 2017 in Guns Save Lives 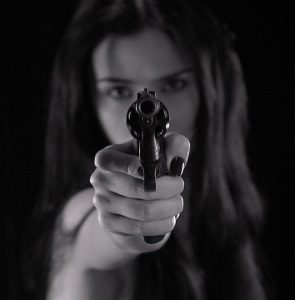 An odd story of both tragedy and blessing out of San Antonio this time around as a woman from the East side of the city used her firearm to defend herself against an intruder, perhaps saving her life. However, the tragedy lies in who the intruder brought with him during this crime turned shootout, his 7-year-old child.

The intruder was a 39-year-old man from New Braunfels named James Carney. Carney attempted to break into his victim’s house in San Antonio last month. The homeowner’s name has not been given to ensure her safety.

Carney, with his 7-year-old child in the back seat of his car, had pulled up in front of the targeted house, when Carney exited the vehicle, thankfully at least leaving his kid inside the car.

As Carney got to the house, he attempted to break in through one of the house’s windows. He had no idea that waiting on the other side was the home’s owner armed with a gun. As Carney made his way into the house, the homeowner took aim and fired on Carney, striking him.

After that, the authorities were called to the scene where they made the discovery of the bloody, mortally injured Carney in the house, as well as his child in the car outside.

San Antonio Emergency responders then arrived and brought Carney to the hospital where he was pronounced dead from the gunshot wound.

We are told that the boy will get the help he needs, but the authorities are keeping the identities of this tragic case private for the well-being of the child and of the shooter.

This is a case in which people can be both thankful and mournful. Thankfully our defensive shooter was a strong and prepared woman and didn’t fall victim to the home invader. However, even in this case we still see a child that will grow up without a father due to his ridiculous decision to resort to a life of crime.

What do you think? Is this a story to celebrate or to mourn? Let us know your thoughts in the comments below.

San Antonio Texas CHL / LTC Course on August 26th, 2017
Cypress Cellphone Thief Ends Up Making Off with Only a Bullet