Join Our Newsletter
Shop Our Store
MAIN MENUMAIN MENU
By Jacob Paulsen on August 25, 2016 in News 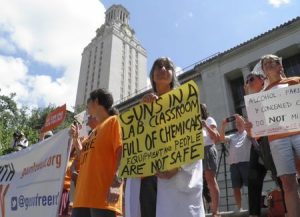 “I’m gonna feel way less safe,” sophomore Bianca Montgomery said. “You shouldn’t have to wonder if your classmates are carrying concealed weapons right next to you. You come here to learn, you don’t come here to fear for your life.”

But Texas’s new campus carry law is now officially in place. The law went into effect on August 1, and a lawsuit by three professors failed to stop it when it was overruled by a federal judge on Tuesday, and there are no other planned legal proceedings in the pipeline. However, students are planning on continuing to exercise their 1st amendment rights about prohibiting others 2nd amendment rights.