Join Our Newsletter
Shop Our Store
MAIN MENUMAIN MENU
By Jacob Paulsen on December 4, 2015 in Law

Why Are Politicians Calling for Magazine Capacity Limitations? 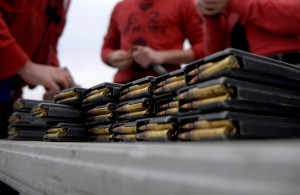 In the words of Joe Biden when speaking about the need for magazine capacity limits after the Newtown Conn shooting, “Maybe if it took longer, maybe one more kid would be alive.” There seems to be a group of people out there who are calling for capacity limitations because they feel us normal people (non-criminals) don’t have any need for high capacity mags and they tend to feel that of all the draconian gun legislation they would like to pass this is one that is lower hanging fruit. Convince the American people that this wouldn’t be an infringement on rights and we can get one step closer to breaking down the constitution.

You should also be aware that there was some successful legislation passed that has since expired. In 1994 President Clinton signed the Federal Assault Weapons Ban of 1994. The law, which went away after a failure to renew it in 2004, had a clause to prohibit the manufacturer and/or transfer of “ammunition feeding devices” with a capacity of more than 10 rounds.

Some of the Claims You May Have Heard

Criminals would have to reload more often and would thus be easier to stop.

This sounds fairly easy to believe on the surface. If we limit magazines to only ten rounds (or any other low arbitrary number) then when the criminal hits that capacity he will have to stop what he/she is doing and take a few seconds to reload. During this momentary weakness good guys can pounce and stop further deaths. The problems with this argument are many.

Law abiding individuals have no need for a magazine that can hold more than — rounds.

Another argument that on the surface, may to some make sense. When I’m out in the woods shooting at deer to feed my family I don’t need a 30-something round magazine right? Here are the holes in this common argument:

Why We Shouldn’t Support This Legislation

To pull the card out of the deck once more let me remind people that laws only effect law abiding people. Criminals ignore magazine capacity limitations wherever possible. Even if the argument were made that somehow limiting access would make it difficult for average criminals to get them assumes that you will also be fully confiscating them from existing owners and not only has that never been proposed but it is also entirely un-enforceable.

As mentioned above, as lawful gun owners we cannot support any legislation that would cripple our own ability to defend ourselves and our families and it is clear that reducing the number of rounds we can carry would limit our ability to do so. While criminals who premeditate crime have an easy time remembering to bring multiple magazines and firearms to the scene, the good guys who respond in self-defense almost never have more ammunition than what is already in the gun.

No proposed number of rounds to which magazines should be limited is viable. 5, 7, 10, and 15 have all been mentioned in the political discussions and local state legislatures. How are we to arrive at the number? There is no appropriate way to determine the correct number.

If we start with any magazine limitation at all… where will that lead us? Once a law has been passed it becomes all to easy to change the number or add to the limitations. It becomes a slippery slope.

It Didn’t Work Last Time. Some research was done to determine if the 1994 law had positive impacts. All the research said the law had essentially no effect.

The study by Christopher S. Koper, Daniel J. Woods, and Jeffrey A. Roth of the Jerry Lee Center of Criminology, University of Pennsylvania found no statistically significant evidence that either the assault weapons ban or the ban on magazines holding more than 10 rounds had reduced gun murders. However, they concluded that it was “premature to make definitive assessments of the ban’s impact on gun crime,” and argue that if the ban had been in effect for more than nine years, benefits might have begun to appear.

A 2004 critical review of firearms research by a National Research Council committee said that an academic study of the assault weapon ban “did not reveal any clear impacts on gun violence outcomes.” The committee noted that the study’s authors said the guns were used criminally with relative rarity before the ban and that its maximum potential effect on gun violence outcomes would be very small.

The Brady Center to Prevent Gun Violence did find in their research that the percent of firearm related deaths involving the firearms banned did decrease. To this I say… duh, of course they decreased if the guns weren’t available. But did the total number of gun related deaths decrease? No. So criminals still killed people with guns regardless.

The Prepper and Survivalist Survey
VIDEO: How to Draw Your Concealed Carry Firearm and Present It