Join Our Newsletter
Shop Our Store
MAIN MENUMAIN MENU
By Jacob Paulsen on October 23, 2015 in Firearms 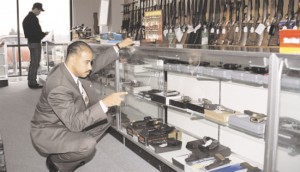 What Are “Universal Background Checks”

The Brady Handgun Violence Prevention Act of 1994 (Brady Act) requires federally licensed firearms dealers (FFLs) to perform background checks on prospective firearms purchasers to ensure the firearm transfer would not violate federal, state or local law. Anyone who makes a business out of selling firearms is required to obtain a FFL from the ATF. The law doesn’t currently have any provision that requires background checks  to be obtained for private sales or transfers from one individual to the next within the same state. The media calls this the “gun show loophole” and feels a new law is needed to close the gap. While we would imagine that a number of private transactions do take place at gun shows, a large number of the transactions that take place there are done by FFLs and do require a background check. Put differently, the laws that apply at gun shows are the same laws that apply everywhere else in the country. No legal exceptions are made. (Great piece from TruthAboutGuns about the supposed loophole)

A small number of states have passed local or state laws that do enforce these universal background checks with Colorado probably being the most notable with the new law going into effect in July 2013.

The Misinformation Being Spread

The most common lie we hear from politicians (including Obama and Clinton) is that as much as 40% of firearms sold don’t require a background check. This would lead us to believe that for every 100 guns sold in this country, 40 of them were sold by private individuals and thus didn’t require a background check. This figure of 40% is derived from a 1994 survey of only 251 people. The survey is flawed in so many ways. First, its over 20 years old. Second, even if the study was trustworthy, studies of the survey data suggest that using the 40% figure is an exaggeration of the findings. At the highest only 22% of gun sales come from private sellers (Washington Post Fact Checker). Third, and most important, no survey based on a sample size of 251 in the context of millions of gun purchases can be considered statistically sound. It wouldn’t even pass a high school stats class standard. (Yeah, it’s that ludicrous). For more details about the statistically silliness read this great article from Truth About Guns.

Probably the most disturbing lie about this proposed legislation is that it suggests it will solve a problem that is somehow responsible for American tragedies. The media and many politicians would have you believe all the famous killers of the last five years all went to a gun show, approached a private seller, and proceeded to purchase big and scary guns. This is almost never the case. The majority of criminals either A: get their guns legally by passing a background check,  B: steal the firearm from a friend or relative (stealing is already illegal), or C: steal the guns in car break-ins, home invasions, or other criminal pursuits (also already illegal). (Chicago Sun Times Reports on a Recent Study)

Some politicians also attempt to point out the success of the law in states like Colorado as a reason to pass it at the Federal level. Don’t be fooled by the numbers they give you. They may tell you that a certain number of people have been stopped based on the numbers of how many didn’t pass background checks when trying to buy a gun. Check those stats to see how many of those failures took place with FFLs where the person would have had to have passed a background check before the law passed. A study in 2009 suggested that 94.2% of denials are actually false positives anyway, which means a lot of those people were able to buy guns after sorting out whatever it was that triggered the denial in the system. Also take note that no research can tell you how many people that fail background checks just proceed to obtain a gun illegally after the denial in the store.

Why It Won’t Make Any Difference

This legislation won’t make any difference because people who have decided to harm others can still get guns just as easily with a “Universal Background Check” law in place. There is extensive evidence to suggest this is the case by looking where past criminals have obtained their guns. Here is an article published by the New York Times (shocking) in which they outline where the last 14 most popular shooters got their guns. Spoiler alert… they all passed existing background check laws except for one who stole the guns from his mother.

The other reason it won’t make any difference is because offenders are rarely prosecuted for breaking the law. Stop and think about this. It is illegal to violate the Brady Act but the criminal is only “stopped” if they are caught and prosecuted. The average number of bad guys that are “stopped” and prosecuted each year for breaking this law… about 3.5 people per year.

Why The Gun Community Sees it As Potentially Harmful

Before we get into the real dangers let’s start with something more practical; the cost of enforcement. If you look at states where Universal Background Check laws have been passed you can discern a few patterns. First, local law enforcement has no means or resources by which they can enforce the law. Unless a firearm was clearly manufactured after the law was passed there would be no inference that the owner had acquired it after the law was passed.

The term transfer is a boiling pot of hot water. If the law criminalizes transfer of a firearm without a background check how can you try out your friend’s gun when standing next to him at the range? How can your spouse pick up your firearm in self-defense without breaking the law? In fact, in 2014 in Colorado, a law enforcement agency wasn’t sure how to return a firearm to its owner without breaking the law since the agency itself doesn’t have a Federal Firearm License and can’t run background checks (Story). You may suggest that the law could contain provisions that allow family members to transfer firearms without background checks (like the Colorado law does) but that makes the point all the more invalid and makes the enforcement all the more impossible.

Certainly however the biggest reason gun rights advocates oppose the idea of Universal Background checks is because it takes us one step closer to firearm confiscation. It would be nearly impossible for the government to confiscate guns without knowing who owns what guns. The easiest way to create that database is by making all transfers of firearms require a background check. While you may have been told that the Federal government doesn’t keep a database of gun buyers you have been misled. Yes, the FBI does destroy the paperwork and evidence of a background check shortly after it is performed, but the ATF requires that FFLs keep detailed paper records of every background check performed. These records must be made available to the government without notice; and should a FFL decide to close up shop the records must be turned over to the ATF. So, yes, there is a paper record of every background check performed and the government has access to it. That record includes the date, the name and address of the buyer, the make/model of the firearm, the serial number, the type of firearm, and the caliber/gauge of the firearm. Gun rights supporters take comfort in knowing not every single transaction is recorded. If private transfers were criminalized, confiscation wouldn’t be far away.

If you don’t think your neighbors or elected officials would really try to confiscate all guns then you aren’t paying attention… but that is an article for another day.