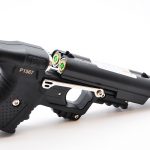 Texarkana, Texas—A man has been arrested after being held at gun point by an elderly woman in Texarkana on Saturday. According Texarkana Texas Police Department (TTPD) officers responded to the 400 block of West 29th St. of a call from an elderly woman who said she had a man at gunpoint in her home. She […]