Catalytic converters contain palladium and rhodium. These metals fetch a pretty penny at recycling centers. For this reason, thieves cut them off vehicles and turn them in for some quick drug money. Texas made the list of top five states for most catalytic converter thefts. 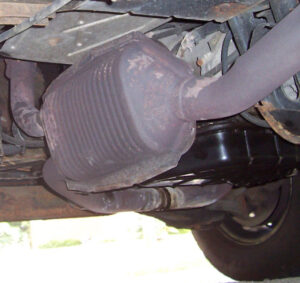 So what does this have to do with concealed carry?

More thefts equal a greater possibility for a confrontation between the vehicle owner and thief. But, unfortunately, confronting the thief isn’t always the smartest thing to do.

Each month I sift through 50 or so news stories of civilian defensive gun uses. Then I whittle it down to 5 or 6 that make it into the Podcast. I can’t think of a month where I didn’t find at least one report of a person who left the safety of their home to confront someone on their property.

I get it. People work hard to earn money and provide for their families. And replacing a catalytic converter and other exhaust work is not cheap. So it becomes very tempting to try and intervene in these situations.

For example, here are two incidents from Texas. The first took place on the night of July 9th in Fort Worth. News reports say a father and son left their home to confront a catalytic converter thief. Ultimately, the father is shot in the chest by the thief. You can read more about the incident here.

The second happened in Houston on an August 14th night. Again, a man leaves his home to confront tw0 thieves stealing the catalytic converter off his vehicle. According to news reports, one of the two men advances toward the owner with “a drill.” The vehicle owner fires several rounds at the pair striking one of them.

Neighbors told ABC13 one of the men came at the owner with a drill and that’s why he opened fire. https://t.co/IlnQiLd4Jk

One ends up in the hospital, the other in custody. Reports say the police are still investigating and haven’t cleared the shooter or arrested him. You can find more info on this incident here.

These are just two recent incidents that popped up in my news feed. And I know we harp on the principle of avoidance and not leaving a position of safety to confront a thief. So it may appear like I’m beating a dead horse here.

You may be right. However, I feel inclined to remind and encourage anyone who reads these posts that their life is much more valuable than any “thing” a thief can steal.

Any time we are involved in any confrontation, the odds of us getting injured/killed increase. But not just that. We increase the odds of our actions leading to injury or death of someone, criminal or innocent.  And we could also end up going broke defending our actions in court or spending years in prison. 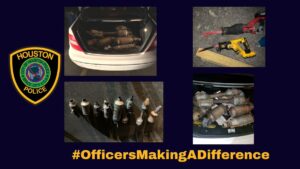 I am certainly not suggesting that confronting someone is illegal or immoral. It just may not be the wisest choice.

I hope if you find yourself in a situation like this, you have a sober mind and make a prudent choice. Before you get involved, ask if your life is worth more than a catalytic converter. If so, calling the police and giving a good description and direction of travel may be the best course to take.

Self-defense law can seem very complicated. However, a fantastic resource is this book called The Law of Self-Defense from Attorney Andrew Branca. I can’t recommend it enough. I believe that every person who owns a gun for self-defense read the book. 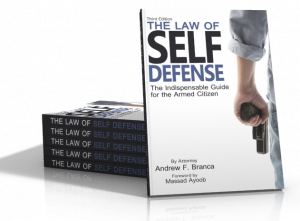