Join Our Newsletter
Shop Our Store
MAIN MENUMAIN MENU
By Jacob Paulsen on September 21, 2020 in DGU

This previous week an incident occurred in Houston Texas that reinforces the importance of good tactics and marksmanship under pressure.

A criminal involved in a “previous incident” was driving a Ford truck and pulled into a local Valero Gas Station at approximately 1:15 am.

Apparently deciding to switch vehicles the suspect abandoned the Ford pickup and attempted to carjack a silver SUV.

Inside the SUV was a “woman.” We don’t know the relationship of the woman to the driver or where inside the vehicle the woman was.

The man pumping gas then “pulled out his gun and fired several shots at the suspect.”

Following the shots fired the suspect exited the SUV and collapsed behind the gas station due to his injuries. The innocent woman in the SUV was uninjured.

Based on the news footage I presume at least 6 shots were fired based on the holes in the PASSENGER SIDE of the front windshield. 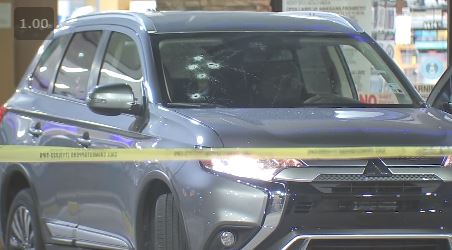 It is never my intention to criticize anyone who has faced such a situation but there are some good things we can learn from this story and today I’m going to share 3 lessons that I hope you will consider TODAY and attempt to implement as soon as possible if you haven’t already.

1. Counting on the gun you keep in the car to help you?

I meet a lot of gun owners who stage/store firearms in their vehicles either permanently or just when they are in the vehicle. If this man’s gun had been in the SUV while he was pumping gas he would have just stared in horror watching his car drive off with an innocent person inside.

One of the biggest lessons this incident can reinforce is the importance of having your firearm on your person. Retrieving it from somewhere else at the very least will cost you valuable time but at worst (as would have been the case here) it may not be an option at all and you will be left defenseless.

2. Would You Have Seen It Coming?

Situational Awareness has become almost a meaningless buzz word but regardless risk reduction is most effective when you remain aware of your surroundings and take action at the first signs of danger or suspicion.

I don’t have any surveillance video I can review from this incident so we lack some of the details that would otherwise help us but I think broadly we can still learn the value of situational awareness in this case.

When you are pumping gas how well are you retaining control over the vehicle and paying attention to others in the parking lot; especially those who pull in rapidly and approach you and your vehicle?

This time it ended up ok, but the shooter may have been lucky and would likely have been in a better position if he confronted the suspect outside the vehicle.

The last place I ever want to find myself taking gunfire is inside of a vehicle. The cover is very limited, movement is even more limited, and my ability to put shots on target in any direction is also hampered.

Working around the outside of a vehicle as our shooter did isn’t easy but doing so knowing there is an innocent person inside is my absolute worst-case scenario.

If you expect to have great confidence in shot placement under those conditions I think you are naive. The target is moving, the glass is going to change the trajectory of your bullets, and your innocent person inside the vehicle can’t move or seek cover.

From the picture, we see the shots entered the vehicle through the passenger side of the windshield. I don’t know where the innocent woman was sitting or at what angle the shots were fired but that picture sure causes me some sober reflection.

The challenge is that most of us WILL NEVER have the opportunity to practice shooting from within, around, and into vehicles. Classes that provide that kind of experience are expensive and hard to find. This is why we filmed a complete and comprehensive training course that anyone can watch from the comfort of their own home. We call it Vehicle Firearm Tactics and it has been applauded by some of the top trainers in the industry.

If you haven’t already, sign up for the Vehicle Firearm Tactics course and complete it as soon as you are able. The vehicle is arguably the most vulnerable place you spend time. Fortify your skills today!