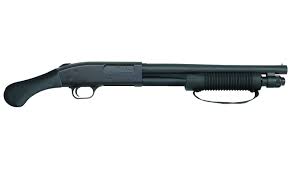 According to Harris County Sheriff, Ed Gonzalez, a Channelview homeowner heard noises coming from outside his trailer home and when he went to investigate, he saw three men all dressed in black, trying to force their way in.

He ran away quickly and notified his roommate who exited his room armed with a shotgun. The man fired on the 3 intruders and a gun battle erupted between them.

The homeowner was struck by the gun fire but killed all 3 intruders before he went down. Sheriff Gonzalez said there may have been even more people outside the home when the shooting began, but officers were only able to locate the bodies of the men killed by the homeowner.

The victim was transported to the hospital with at least one gunshot wound to his leg and another near his spine.

“We’re told it’s serious. But he’s going to be going into surgery so we’re not exactly sure of his condition,” the sheriff said.

The victim’s roommate was not injured in the gun battle and Sheriff Gonzalez said that the investigation is still on going but this appears to be a case of self-defense.

“A person does have the right to defend themselves if that’s what the facts are,” the sheriff said. “We’ll have to confirm that. Everything is preliminary.”

The Sheriff went on to say that it isn’t clear why this home in particular was targeted for the home invasion but recommends others who are planning to commit crimes like this find another form of work.

“If it turns out that that’s what they were doing — breaking into someone’s home — regardless of the circumstances, crime doesn’t pay,” he said. “Eventually you’re going to end up dead or end up in jail, most likely.”

Good home defense is planned, prepared and trained for. Read here for the Complete Home Defense – Tactics For Defending Your Castle for the latest tactics and techniques for home defense.

One Response to Homeowner Kills Three, Wounded Himself in the Fight