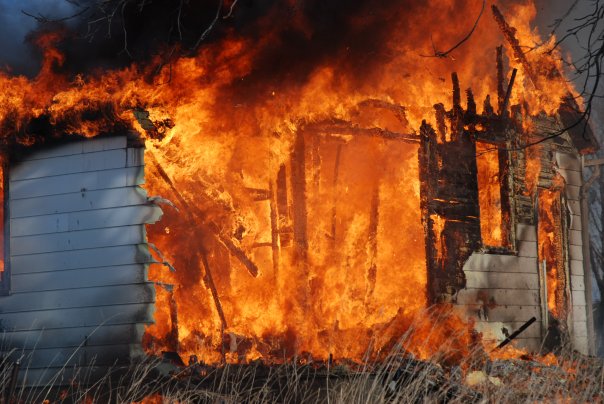 Houston, Texas — A man is dead after setting fire to a house in Houston, then stabbing a woman multiple times.

According to Houston Police Department (HPD) Homicide Detective Jerry Young, A woman located in a home in the 300 block of E. 35th St., called 911 early last Wednesday to report an individual she had been in a relationship causing problems at the home.

By the time police arrived, the suspect had fled the area. He returned at around 10 a.m. after police had departed the scene, this time armed with a fire accelerant. He broke out a window and began dumping the accelerant into the home, then climbed inside and continued to pour it throughout the residence before setting it alight.

“Basically, he came back to the scene, broke a window up front and poured an accelerant into the window and lit it on fire,” said Detective Young.

The suspect then grabbed a piece of the shattered glass from the window he’d smashed and chased the woman out of the home into the backyard where he caught up to her and began stabbing her repeatedly.

A nearby neighbor who heard the attack grabbed his gun and went to help. When he saw the man stabbing the victim, he plead with him to stop. But when the suspect refused, the neighbor fired, killing him.

The fire department rushed to put out the flames while medics began treating the life-threatening injuries to the woman, and transported her to Ben Taub Hospital where she underwent surgery for her many wounds and is listed in critical condition.

The armed neighbor remained at the scene of the fire and shooting and is reportedly cooperating with detectives in the investigation. No reports of any charges being filed against him for shooting the suspect at this time.

Gwendolyn Harris, the niece of the 80-year-old homeowner and sister of the victim’s boyfriend, said she’s glad the homeowner was armed and willing to help,

“They did a good job,” Harris said. “It’s justice, because he (the suspect) had no business setting that house on fire and had no business cutting up that girl like he did. I’m trying to make sense with all this going on.”

“My sister called and said somebody got shot, (the victim) got cut up and the house was in flames,” Harris said, adding that her uncle had been in the now destroyed home for some time.

Harris’s elderly uncle was in the home at the time of the altercation and was able to make it outside. There are no other injuries reported.