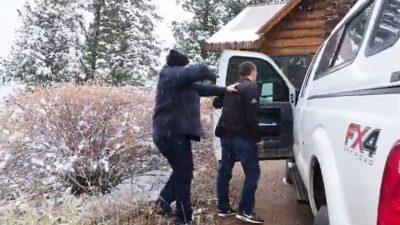 Huston, Texas – A home invasion ended without injuries after a home invader ambushed a couple as they pulled into the garage of their home late Sunday night.

According to LT. Christopher Bruce of Huston Police Department (HPD), a tall man wearing a ski mask and all black clothing met the homeowners returning to their house at around 10 p.m.

Armed with a gun, the intruder forced the couple to unlock their home and walked them inside, demanding the wife to hand over her valuables. Once inside the home the husband began to fight with the suspect and was pepper sprayed for his trouble.

The homeowner ran outside on to the front street calling for help when couple’s son arrived at the home.

The son chased the suspect who, when he saw he was being pursued, turned and fired in the direction of his pursuer. The son drew his own weapon and returned fire, but it is unknown if the suspect was struck by the shots.

HPD brought in K-9 units to try and track down the suspect but were unable to locate him.

No injuries were reported for the homeowners and their son was not struck by the gunfire from the gunman.

Lt. Bruce says that robbery investigators and patrol officers are canvassing the neighborhood for surveillance video footage of the incident and that the investigation is still ongoing.

Chasing after a suspect when they are fleeing from you is a bad idea for a number of reasons. First is the fact that as you are pursuing them, the suspect(s) won’t be happy you are following and may try to harm, or dissuade you and the risk of being struck by gunfire as shown above makes this a hazardous choice.

Second, if you do catch the suspect who was fleeing the scene, it will be hard if not impossible to explain to a court you were merely protecting yourself when it’s clear neither you nor your family members are in danger any longer. The court could very well say that you were actively putting yourself into danger without a good self-defense reason.

If the bad guys run away, count it as a win and wait for the police to arrive. Read here for the Complete Home Defense – Tactics For Defending Your Castle for the latest tactics and techniques.

Home invasions like the one in the article above are not at all uncommon and criminals use tactics like the one described here. Read here, for training on how to handle Door Ambushes.

One Response to Son Chases Away Armed Masked Man