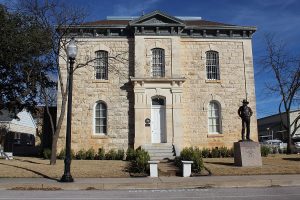 Burnet County, TX—Burnet County Sheriff’s Office (BCSO) says a fugitive they were trying to locate was caught by a property owner on 18 June.

During a traffic stop, deputies contacted 40-year-old Benjamin Willis Becker for a parole violation. Becker fled the area, leading deputies on a short vehicle chase before jumping from his car and running into the countryside.

“Becker then fled on foot into the very rugged terrain behind the store and fell down several feet into a ravine,” said Burnet County Sheriff’s Capt. Chris Jett in a statement about the incident.

Despite using both K9 units and a helicopter to locate the fugitive, Becker escaped.

“Burnet County communications activated the reverse 911 system to notify area residents of the suspect’s description and last known location. BCSO deputies and officers from other agencies looked for Becker until approximately 9:30 PM. It was believed that Becker had injured himself in the fall into the ravine and that he would eventually seek medical attention.”

The reverse 911 system was successful in alerting a homeowner on Indian Springs Rd. to be wary of the man asking for assistance at their gate at 8:16 a.m. 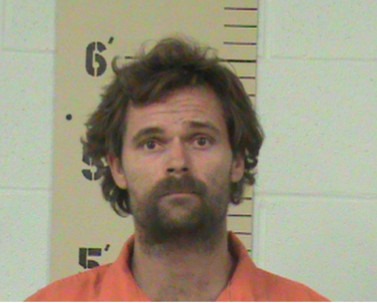 According to Capt. Jett,

“The caller reported that Becker had arrived at their front gate and asked to use a phone. Becker left the area on foot before deputies could arrive. Deputies quickly set up a perimeter in the area of County Road 143 and the reverse 911 system was again activated to notify area residents of the suspect’s updated location and description.”

Once more, the reverse 911 system was successful in alerting county residents of Becker’s description and last known location.

About an hour later, BCSO received another call, this time from a man identified only as Joshua, who said he had the man deputies were looking for, at gun point.

“I saw a man who didn’t have a shirt on and hair was kind of disheveled and he looked out of place to be dressed that way that early in the morning,” Joshua, a USMC veteran told CBS Austin.

Joshua suspected this was the man he’d received an alert about from the Sheriff’s Office. He gathered up his gun and dog and went to search his property.

After a short canvass of the area, Joshua’s dog alerted on something nearby.

“He was laid down on the bank behind some rocks and his legs were sticking out and my dog was pointing at his feet just very quiet,” says Joshua.

The property owner approached Becker and held him at gun point while he dialed 911.

“The operator came on and said, ‘what’s your emergency’ I said ‘well the man that the Burnet County Sheriffs are looking for is here and I have that man at gunpoint’.”

Deputies arrived within 4 minutes of the call being placed and took Becker into custody without trouble. He was treated by medics for,

“… injuries sustained during his night on the run in the wilderness. He was dehydrated and scratched up but otherwise uninjured.”

He was taken to Burnet County Jail where he was booked for his warrant of a burglary in Austin.

Joshua went on to credit the quick response of deputies and the the alert system system for notifying the public of a potential threat on the loose.

“This incident shows the power of cooperation between law enforcement and the public. The reverse 911 system allowed us to quickly get information out to the public in the area of this incident,” said Capt. Jett. “The arrest of this suspect was the result of alert citizens making phone calls based upon the information that they had received.”

Using this example, Burnet County Sheriff’s Office encourages residents to sign up for the alert system so they can be notified of emergencies as well.