Join Our Newsletter
Shop Our Store
MAIN MENUMAIN MENU
By Jacob Paulsen on November 16, 2014 in Stats 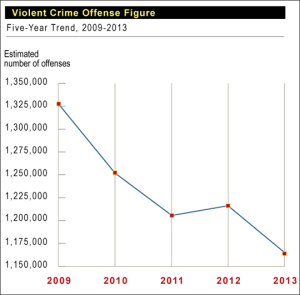 The FBI has released an annual report that shows the trends of various types of crime. The report called Crime in the United States, 2013 can be seen here. When comparing 2013 to 2012, it shows that the estimated number of violent crimes in 2013 decreased 4.4 percent when compared with 2012 figures, and the estimated number of property crimes decreased 4.1 percent. There were an estimated 1,163,146 violent crimes reported to law enforcement last year, along with an estimated 8,632,512 property crimes.

The second amendment lobbying camp has been quick to point out that these types of crimes are trending down despite the number of guns in American rising. More and more Americans are getting armed as they recognize the importance of taking one’s own security and safety upon oneself. We’ve seen the recent studies that outline the increased interest in self-defense among the total population but especially among women.

Further assumptions can be made by looking at the individual state data and comparing it to local gun laws and firearm rates of sales based on background checks as reported by individual states.

Take a look at the full report and come to your own conclusions!