Join Our Newsletter
Shop Our Store
MAIN MENUMAIN MENU
By Matthew Maruster on January 12, 2022 in News

Imagine being shot in the chest. Now also imagine that your 1-year-old child also gets shot in the leg. Things couldn’t be much worse. Not unless the shooter is your 2-year-old, and the gun used is the one you carry to protect yourself and your family. 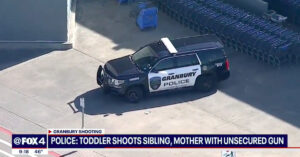 A tragic event in Texas —

According to local news station Fox 4, the incident happened in a Walmart parking lot at around 11:30 AM.

The two-year-old child inside the vehicle accessed an unsecured and loaded gun that was left tucked between the driver’s seat and center console.

The mother received transport by life-flight to a Fort Worth hospital with serious injuries; her condition is unknown. Paramedics transported the 1-year-old to the same hospital with non-life-threatening injuries.

Why talk about the incident —

I am quite positive that nearly 100% of the social media comments on this story will describe the woman as irresponsible, reckless, and a total idiot. But, unfortunately, that’s all some will get from this incident.

However, I hope we can do more than take an opportunity to hurl ad hominem attacks on a woman who was involved in a horrible incident. We don’t actually know if it was her gun or not. Maybe it belonged to the other adult, and she didn’t know it was left there. I’m not suggesting this is the case, just that it’s a possibility.

So instead of assuming we know facts that we don’t, let’s stick to what we know. And, it really doesn’t even matter if it was the mother’s gun or not, so long as we’re just trying to learn and not blame. It doesn’t take some profound or expert analysis to figure out what went wrong. It’s simple; a gun was left unsecured.

What can we learn —

I can’t recall any incident in which a toddler shot a gun, where they wrestled the firearm from an adult to gain access. It’s always an unsecured firearm. There are other causes of neglect or unintended firearm discharges. Still, at least in these cases, the easiest way to eliminate the possibility of something like this happening is to keep the gun attached to your body inside an appropriate holster.

We can accomplish this in two simple ways. First, we don’t use our car as a holster. There are many tactical and practical reasons you shouldn’t take the gun off your body and put it in some vehicle-mounted holster. However, that isn’t the scope of this post, but you can see that argument by clicking the link above.

I don’t think for a second that whoever left the gun in the vehicle had the idea that one of the children would access the handgun. They either forgot the gun was there or got out and thought; I’ll only be out of the car for a second; the kids won’t have time to get the gun. This is one of the dangers of building the habit of leaving the gun in the car. It starts because of a need for comfort or convenience and turns out that the gun becomes an afterthought and easily left unsecured in the vehicle. 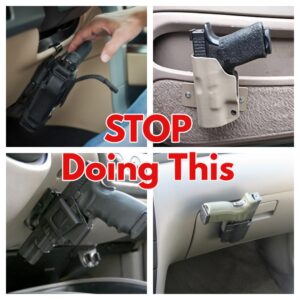 I know all the arguments for using vehicle-mounted holsters. If you want to understand them also, read the comments in the article I provided a link to above. I have yet to hear a reason to use a car-mounted holster that makes it worth removing the gun from my body, not one. Sure there are arguments, but all are suboptimal compared to keeping the gun in a holster and on your body.

Secondly, ff you must carry off-body, make sure you treat the bag differently than any other bag. You absolutely must have positive control of the bag containing your gun at all times. There is no reason not to. But, again, you can make arguments, and again it all boils down to comfort or convenience. And they are all suboptimal.

Why do you carry a gun —

A gun isn’t a fashion accessory; it’s a dangerous tool that you have decided to carry for your protection or the protection of another innocent person. You are responsible for carrying the gun and maintaining control of the gun. It is normal to have some difficulty finding a comfortable method of carrying inside or outside of your vehicle. We have tons of content to help you figure out how to select a holster or carry position. We even have content on best practices of off-body carry. And there is content available on the internet that you can sort through to find what works best.

Don’t choose a suboptimal method of carrying that increases the risk, simply for convenience or comfort.

Consider subscribing to the Concealed Carry Podcast. We produce two episodes a week covering a multitude of topics that directly affect concealed carriers. If you’re interested in hearing the podcast where we discuss this very topic, check out Season 2 Episode 10. 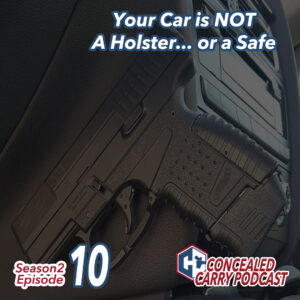 30.06 and 30.07 Signs, Where Can’t You Carry in Texas
JM4 Tactical Releases Line of Locally Roasted Coffee

Leave a Reply to Dave Click here to cancel reply.