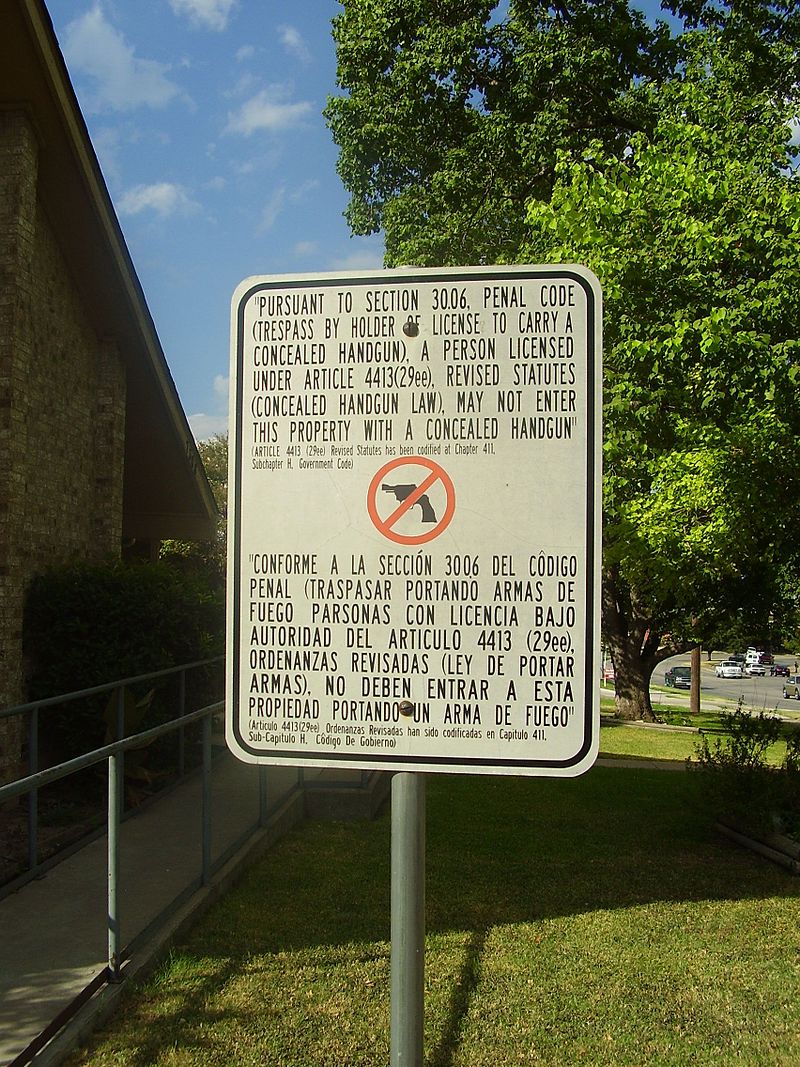 UPDATE: The original version of this article has been changed and updated based on additional research and helpful comments written by readers. Thank you to all who keep us honest and check out research!

Gun law can be confusing. Even those who consider themselves experts do as poorly on The Self Defense Gun Law Quiz as those who don’t. In fact, the average score is between 5 and 6 out of 10, regardless of the professed amount of legal knowledge.

It makes sense; gun law is tricky. The legal jargon can be almost impossible to wade through without having passed the Bar Exam.

In this article I hope to shed some light on the Texas state laws regarding the carry of a firearm onto the premises of businesses which do not allow it, and the differences between a 30.06 sign, and a 30.07 sign

Additionally, we will look at what happens if you are discovered with a firearm in a business that prohibits guns, like this 22-year-old man did recently after he accidentally shot himself in a Chuck E. Cheese’s.

Hopefully, you won’t have a negligent discharge in a children’s restaurant, but you could be discovered in another way. Such as, if you were to grab something off the top shelf and your shirt comes up revealing your holstered pistol.

Some establishments choose not to allow weapons onto their premises for a variety of factors. Whether you agree with these reasons or not, it is the choice of the business to decide if they will, or will not, allow firearms.

It is private property after all, and they have the right to say who is and is not allowed on their property, just as you’d expect in your own home.

If a business doesn’t allow weapons on their property, they must notify their customers with either a verbal and/or written notice and both carry the same weight in court.

Some businesses are required by law to have a sign posted making it clear the legality of carrying a gun onto the property. According to the Texas Alcoholic Beverage Commission, if a business derives 51% of its revenue from the sale of alcoholic beverages for on-premises consumption, they must post a “51%” sign. 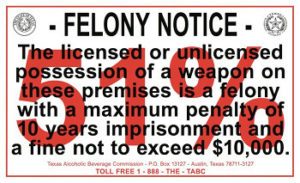 If a business derives any revenue from alcohol sales up to 50%, they must post this sign at every entrance: 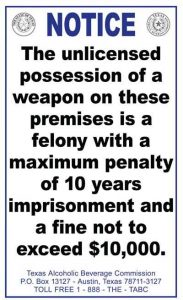 Notice this sign says “Unlicensed.” So, if you see this sign in a restaurant and have a concealed handgun license, don’t worry, you’re good to go.

Some businesses don’t have a choice, so keep that in mind and don’t be too hard on them.

Signs banning guns are not a friendly suggestion, they actually carry the weight of the law in Texas. But, the sign must be displayed in a particular way in order to be correct. The sign must:

This means taping a napkin up in the window with “NO GUNS” scrawled across it in Sharpie doesn’t cut it in court. 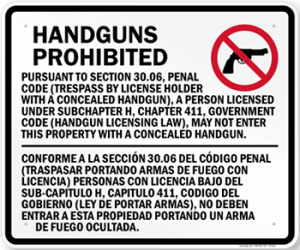 This is the law written for businesses who do not allow weapons on their property. The offense is called “Trespass by License Holder with a Concealed Handgun.”

Now comes the big question of what happens if you choose to ignore the posted sign.

Ignoring a sign is at least a Class C misdemeanor, which is punishable by a fine of up to $200 but it could be as much as a Class A misdemeanor depending.

To better clarify the consequences of ignoring the signs, I’ll use the case of the man who shot himself in the Chuck E. Cheese’s as an example:

If, (under Texas law) the man possessed a firearm in an establishment which displayed a written notice banning guns, he faces a Class C misdemeanor. If, however, he was approached by the Chuck E. Cheese’s staff and asked to leave because he was carrying a pistol and did not, he could face a Class A misdemeanor offense (on top of the gunshot wound to his leg.)

Class A misdemeanors are substantially more severe. The offense could carry a punishment of up to a year in a county jail, and a fine of up to $4,000. That slice of greasy cheese pizza isn’t worth it in my book.

It’s come to the attention of those of us here at Concealedcarry.com that some people have don’t understand the difference between Section 30.06 and the closely related Section 30.07, but hang in there, this is an easy one.

Section 30.07 or, “Trespass by License Holder with an Openly Carried Handgun,” is essentially the exact same code as Section 30.06.

Except, code 30.07 specifies open carry, while 30.06 specifies concealed carry. Everything else is essentially the same. 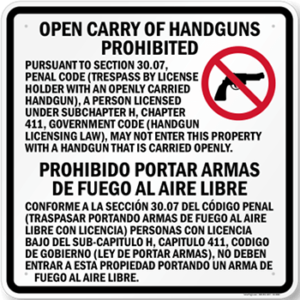 You can carry concealed in a 30.07 labeled establishment, but you cannot carry open. If the business wants to prohibit both open and concealed carry both signs should be displayed.

This is an important distinction because some businesses understandably don’t want customers to be afraid of your openly displayed pistol, but don’t mind having licensed concealed carriers on their property.

“A person licensed under subchapter H Chapter 411, Government Code (Handgun Licensing Law), may not enter this property with a handgun openly carried.”

This means, even if a person has been issued a Concealed Handgun License, they are still not allowed to open carry on a property where the 30.07 sign is posted.

Whether or not you agree with a business’s choice to prohibit concealed carry, they have that right, and you could be held legally accountable if you ignore the signs.

If you feel strongly that you should be allowed to carry inside every business, vote with your wallet. Read here for a list of businesses which are not 2nd Amendment friendly.

Disclaimer: I am not a lawyer. This article is my interpretation of the laws as I read them. If you have a legal background or a greater understanding of the law then I do, please leave a comment to let me know what I got wrong.

What is your opinion on business that are not 2nd Amendment friendly? Let me know in the comments below.